"Her sound was simply so clean, pure and delicate – really touching"

Press review from April 2017 / in danish 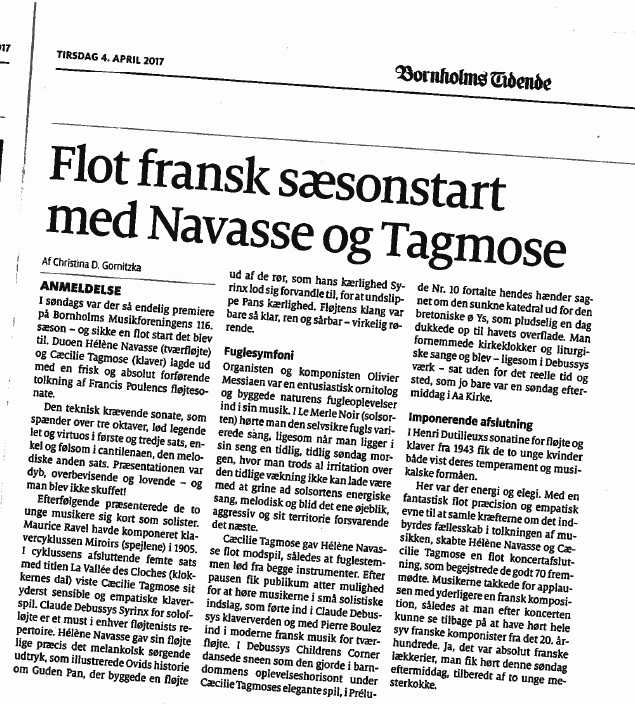 Press review from January 2015 / in danish
click for reading the article. 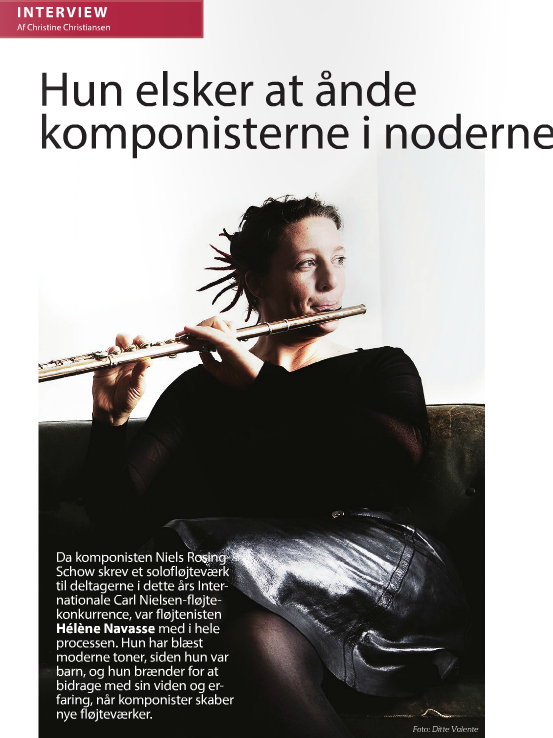 “… it is rare to hear such a rich flute sonority…”

“Outstanding concert that evinced a high artistic level and a luminous talent”. “Flautist Hélène Navasse performed an impressive artistic piece of work with a wide-ranging, fascinating repertoire. Navasse’s exceptionally fine playing… carried the music forward in the three movements of the piece with intensely delicate and lightweight trills and a freely flowing airy elegance that imparted spirituality to Vivaldi’s music….Chant de Linos (by A. Jolivet) … really shed light on Navasse’s virtuosity. The embellished escapades in this atonal piece were unfurled with perfection and the flute’s trills whirred with intensity. The splendid chamber playing continued and Sofia Gubaidulina’s “Allegro rustico”… made its appearance with vigour, determination and exceptionally sharp concentration. Concentration was a permeating and recurrent thread running through Navasse’s way of playing, a circumstance that could not fail to engender an alluring focus around the music… (In P. Boulez’) “explosante-fixe…transitoire VII” …the virtuoso-like figurations leaped about in Navasse’s playing with spontaneous outbursts and lavish tone-effects… Navasse mastered these gestures with bravura and certain passages in the music came to acquire an almost hypnotic character… A most fascinating flute technique, which tended toward the outer limits when it came to expressive range… Navasse was extraordinarily convincing … Hélène Navasse, in addition to possessing an impressive soloist capability and a delicate, stylistically interpretative capacity, understands how to take up her place in a chamber music situational context with sympathetic insight and sharp concentration. Her manner of embracing the music, all the way from … Vivaldi …to the new music, was living proof of this.”

“In Pierre Boulez’ …“…explosante-fixe…”… Hélène Navasse immediately caught our interest with her subtle structured playing…. Hélène Navasse mastered the complete flute family, from the piccolo to the bass-flute.”
Jyllands-Posten , Denmark

“Hélène Navasse demonstrated an outstanding flute-playing, with an elegant sound and an irreproachable technique, which gave the most challenging passages an effortless ease. Hélène Navasse appeared as an outstanding interpret of the newest music…
Bravo! Reverence!”
Basunen, Danish Musicians Association

“Hélène Navasse …gave an extremely convincing performance of P. Boulez’… “explosante-fixe…”…Hélène Navasse played these series of technical challenges in a convincing style with a remarkable good contact with the audience.”
Aarhus Stiftstidende, Denmark

This website uses cookies to improve your experience while you navigate through the website. Out of these cookies, the cookies that are categorized as necessary are stored on your browser as they are essential for the working of basic functionalities of the website. We also use third-party cookies that help us analyze and understand how you use this website. These cookies will be stored in your browser only with your consent. You also have the option to opt-out of these cookies. But opting out of some of these cookies may have an effect on your browsing experience.
Necessary Always Enabled
Necessary cookies are absolutely essential for the website to function properly. This category only includes cookies that ensures basic functionalities and security features of the website. These cookies do not store any personal information.
Non-necessary
Any cookies that may not be particularly necessary for the website to function and is used specifically to collect user personal data via analytics, ads, other embedded contents are termed as non-necessary cookies. It is mandatory to procure user consent prior to running these cookies on your website.
SAVE & ACCEPT